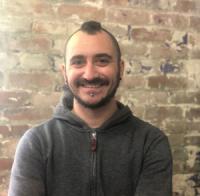 “SCC allowed me to explore all styles of glass work, from cast glass to hot blown glass, and cold working to flameworking,” said Bryan, who grew up in Boca Raton and learned about SCC from glass bead maker and relative Jeri Warhaftig. “There wasn’t a process I couldn’t and didn’t learn about while at SCC.”

After studying with several highly respected glass instructors/artists, including Paul Stankard and Anna Boothe, Bryan earned his Associate in Fine Art in Glass Art in 2009. “Each professor gave me lessons in all forms of glass which I have used in many of my works over the years,” he said. “My proudest moment while at SCC was the day I graduated. It was both exciting and scary all at the same time. I never thought I would go to college, let alone graduate with a degree.”

After SCC, Bryan returned to Florida to earn his Bachelor in Fine Arts in Glass from Jacksonville University in 2012.

Bryan relocated to the Midwest where he worked in one of the United States’ oldest glass art factories, Kokomo (Indiana) Opalescent Glass. As one of only three production glassblowers in a high-functioning studio, he familiarized himself with equipment and maintenance.

In 2017, he received a Master of Fine Art in Glass at Southern Illinois University Carbondale. While there, he served as a Glass Studio Technician.

He now owns and operates Blazing Paddles Glass Studio and stARTup Studios, a Collective 3D arts studio in Macon, Ga. Each day offers something different, which Bryan describes as like entering the unknown. “I never have the same schedule and I never know what new adventures await me,” he said.

Bryan is also an Adjunct Professor at Mercer University in Macon, teaching Fundamentals of 3D Design and Sculpture.

Bryan’s advice to prospective and current students at SCC is brief but memorable: “Never give up and just keep trying; there is no success without failure,” he said.