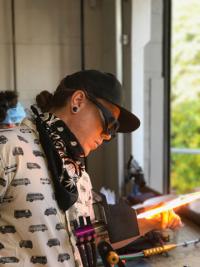 Like it was yesterday, Dan Coyle described how he became interested in glass soon after graduating from high school in 2003. “My friend invited me to go to a Phish festival with him and his older brother's crew. One of them was Jerry Kelly, whom I later learned was one of the OG glass artists from my area of western Massachusetts,” said Dan.

“After setting up our tents and getting settled, ‘the older guys’ fired up a flat top grill and started selling ganja grilled cheese sandwiches,” continued Dan. “To the side, there was a small table setup with hand-blown glass for sale. I was fascinated, especially with these large glass marbles; they had such depth and detail that I got lost looking into them.

“When we departed the festival, I accidently left my acoustic guitar in Jerry's truck,” Dan recalled. “A few weeks later, I was standing in his glass studio just amazed at what was going on -- fire and molten glass. So as he handed me my guitar, I asked him if there was any way I could try glassblowing. It just so happened that he had a small beginner class scheduled the following weekend so I signed right up. At this class, he taught us how to make mushroom marbles. In this process, colored glass is pushed into clear glass which makes it ‘umbrella’ and look like a mushroom. Well, after making them myself and seeing the glass "umbrella"...I don't know…there was just something magical about it... I was hooked!”

Dan’s glass exploration had begun in earnest. “After that class, I rented torch time whenever I had a day off from my full-time cooking job,” he said. “Between renting time, buying glass, tools, and even my own torch from a local supplier, I quickly blew through my savings. Jerry told me about SCC and after researching the school and the scientific glass industry, I was intrigued,” he recalled. “It took a little explaining but I eventually got my parents to sign off on the college loan and in the fall of 2004 I was headed to Carneys Point, N.J.”

He shared his proudest moment at SCC: “Getting a very high grade on a project from my instructor Daryl Smith [the Instructional Chair at the time], who is an incredibly good glassblower and now works for Yale University as the in-house scientific glassblower.”

Dan elaborated on Smith’s impact along with the influence of then-Glass Art professor Anna Boothe and then-recent graduate Kiva Ford who now works at the University of Notre Dame.

The summer after graduating from SCC in 2006, Dan was hired by Lato Scientific in Parker, Colorado, then soon accepted a job at Sigma Aldrich in Milwaukee, where he worked for five years as a scientific glassblower. “I learned so much about glass and scientific glass techniques working at Aldrich, and SCC prepared me to get there. Since 2011, I have been a full-time artist, but I do miss scientific glass a lot,” he said.

He explained how his SCC education helped prepare him for future opportunities. “It gave me two years of practice time on the torch and also a degree, both of which without I would have never landed the job at Aldrich that taught me so much more about glassblowing,” he said. “Although I am not in the scientific glassblowing field anymore, I still have a deep appreciation and respect for it, and who knows, I might find myself back there someday.”

Dan described his work as an independent artist: “I am best known for making sculptural pipes of monkeys. My work is more contemporary, kind of pop art, kind of cartoony, but of its own style and originality. But making the glass is only 50 percent of the job. There are a lot of other things like communications, office work, packing, shipping, designing and promoting.”

Based in western Massachusetts, Coyle works alongside of some of the state's top pipe makers. His work has been displayed in galleries around the world, and has been seen in print and web publications including Vice, Huffington Post, NY Times, and in the book “This is a Pipe” along with his self-published “Munny Project.”

Dan appreciates the value of continuing education. “I try to take workshops as much as I can. After SCC, I've taken workshops with Matt Eskuche, Robert Mickelsen, Eusheen Goines, Loren Stump, Carmen Lozar and Danny White,” he said.

He shared great advice with prospective and current students at SCC:

Prospective students: “If you're a beginner, SCC will give you some practice time while you are earning a degree. If you are an experienced glassblower and want to start a career in scientific glass, SCC will give you the training you need to enter the field.”

Current students: “If you are a student and want to get a scientific job after graduating, then work hard on your projects, make them over and over until you think you made one really clean, and then make another one. If you are a student in the scientific class who does not want to pursue a career in scientific glass, then still work hard on your projects because it will be the only time you get to explore scientific glass apparatus with an instructor on hand. Take advantage of any open lab time and if you can, setup a home glassblowing studio so you can practice when the SCC studio is unavailable.”

Dan’s artist statement: "Often my work is playful in nature and can remind you of toys; I guess I like to bring the viewer (or user) back to their childhood and also remind them to not take life so seriously. Why pipes? Making an object into a pipe will allow someone to bond with that object. They will have experiences with it, develop a relationship with it, and in time it will become more than a piece in their collection—it will become sentimental."