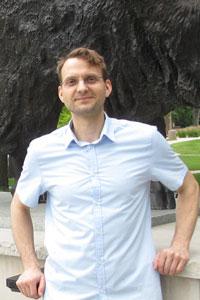 Aaron Kirchhoff graduated from the Scientific Glass Technology program at Salem Community College in 2008. While living in Iowa, he developed a continued interest in a variety of subjects throughout his youth, some of which included art and science.

After a year-long indoctrination into glass working, I discovered the niche overlap between science and glass working. This was the same time I learned there was only one institution in the nation where I could study scientific glass -- Salem Community College. I visited during the annual International Flameworking Conference, and I promptly decided I would double major in glass art and scientific glass technology. I graduated from Salem Community College in 2008.

"I would describe myself as an individual who has always had an interest in the systems and materials which define our universe, and a need to explore the fabric of the human experience," said Kirchhoff, who earned a bachelor's degree in studio art from The University of Iowa before enrolling at SCC.

His initial decision to attend SCC was because he could study glass art and scientific glass technology simultaneously. "The academic structure at SCC enabled me to utilize the full synergistic potential of both of these glass fields," said Aaron, who also earned an associate in Fine arts degree in glass art from SCC.

Salem Community College offers the nation's only associate degree in scientific glass technology. Therefore, according to Kirchhoff, studying at SCC was pivotal to entering the glass field.

Following SCC, he said, "My career benefitted immensely from more than the basic acquisition of glass material knowledge and technical refinement alone. SCC has its finger on the pulse of the glass industry. I rapidly developed a strong group of glass colleagues and firm understanding of the glass career landscape, which allowed me to clarify my professional goals and create long-term career plans."

Kirchhoff's career has been continually growing since his graduation. Over the years, he's had numerous jobs that have helped him gain experience. He also continued his education by earning an MFA in interdisciplinary art from Goddard College in Plainfield, Vermont.

He began his career as an intern at the Scientific Glass Facility at Oak Ridge National Laboratory and later became the sole operator and manager of the National Institute of Standards and Technology's (NIST) Scientific Glass and Optics Shop in the Fabrication Technology Group.

He believes that SCC is particularly special because it provides the students a vibrant learning environment for those who have specific professional goals as well as for those who simply want to be immersed in either artistic or scientific glass exploration.

Kirchhoff's advice can be influential to any student interested in the glass field at SCC: "Take full advantage of the resources SCC has to offer while you're there. Work tirelessly during your time at SCC to fully realize your technical and creative potential. You won't regret it!"