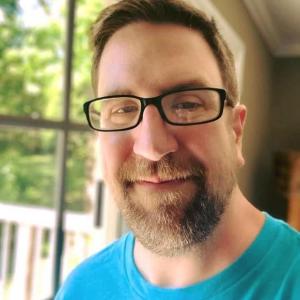 GEICO is well known for its ubiquitous marketing reach. For 13 years, a Salem Community College graduate has played a key role in promoting the insurance giant to a national audience.

As a senior Creative Team member, Christian LeHew handles high-level creative strategy for everything that isn’t a TV commercial, and leads younger colleagues in campaign development and execution. He coaches and mentors, “and am typically the go-to for questions and advice on print production as well as an on-the-fly problem solver,” said the 1996 graduate in communications/journalism who was promoted to his current position in June 2020.

“The thing that I love about working for a company like GEICO with a national marketing footprint is when I’m sitting in a dentist’s office, flipping through a magazine, and see an ad that I’ve done. Or when I’m driving down the road and see a billboard that we created. My first billboard there actually made the AP newswire! It’s something that, even 21 years into this industry, still gives me chills when I see work that I’m really proud of out in the wild.”

Christian is committed to developing his staff, just as others have nurtured his career. “I don’t look at it like, “Oh, I have to do that today.” It’s very much a matter of, “Wow, I can’t believe that I get to do that today,’” said Christian. “I’m just so grateful for all the people that mentored and coached me, and gave me a chance to prove myself. It’s not something that I take for granted – or that I forget – and I pay it forward to others every day.”

One of his early mentors was Egon Necelis Sr., a mechanic and custom-car builder in Carneys Point. At the time, Christian was an aspiring car designer who sought Egon’s critique of early hot-rod sketches. From that experience, Christian received his first exposure to honest feedback. “’Always go for perfect,’ he told me. To him, it meant building custom cars to tolerances that could be measured with a micrometer,” recalled Christian. “But, to me, it was something that could be applied to many things in life. If it was worth doing, it was worth doing well, and doing your best. It was what made Egon stand out from his peers in the custom-car world, and it was something that I’ve carried into my life to help me stand out as well.”

Christian learned his work ethic from observing his father. The late Ron LeHew was a renowned artist and, later, a writer and columnist. “I’d often see him working very long hours to make a deadline for a client. Frequently, I’d stop by the studio [at their Salem home] late at night and encourage him to take a break. He’d take a sip of his tannish-brown French coffee, then look over his thick, dark-rimmed glasses. ‘I can’t – I have to have this done to mail out tomorrow. If I don’t make it, I will have not met my obligation to the client. If that happens, they may not call me the next time they have a job to hire out.’ Since much of his work was based on not only his talent, but also his reputation, those characteristics always stuck with me.”

The LeHew work ethic was also evident when Christian attended SCC and simultaneously started his career in Wilmington. “They were willing to let me work part time and at odd hours so that I could attend classes, which I wouldn’t have been able to do if I had attended a larger university,” said Christian. “The flexibility and availability of courses allowed me to accomplish both the schooling as well as my career.

“The second reason was that SCC was affordable,” he continued. “I had no money to attend college, and didn’t want to put my parents in the positon of co-signing for student loan debt.”

LeHew praised his alma mater for providing his career’s building blocks. “When I started, the availability of personal computers was a fraction of what it has become, and early classes including Typing, Introduction to Computers, and others that helped me get a quick handle on skills that I would end up using my whole life,” he said. “But as the classes became more focused on my degree, I started to realize that the faculty was top-notch.”

Christian also recalled the variety of students on campus. “Many of them were my age, and really quite interesting and intellectual, many of whom I am still friends with today,” he said.

He noted that community college students receive as good an education as their counterparts at a four-year school. “If you decide you want a bachelor’s degree, you’ll have a great foundation from SCC to further your education,” said Christian, who interned at Meals on Wheels of Salem County. “Many SCC graduates have gone on to receive doctorate and master’s degrees – and they started at the same place you are.”

The marketing executive, husband and father also has a blog and social channel on craft beer. He and a friend started Frank About Beer (FrankAboutBeer.com) nearly six years ago. “We hated all the blogs and social channels that were just some random ‘beer expert’ who spent all the time trying to impress you with what they know, and lording over breweries,” said Christian, who pointed out that Frank About Beer’s followers have made it one of the top-three beer blogs in Maryland. “Instead, we wanted one that was frank and honest about craft beer (thus the name), and explained it in easy-to-understand concepts.”