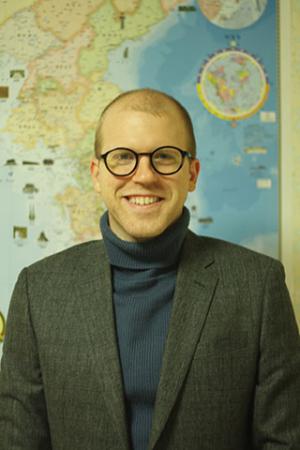 SCC graduate Jeremy Davis and his family in South Korea are coping well during the coronavirus outbreak.

Coronavirus cases peaked in South Korea on Feb. 29, according to Science Magazine. Thankfully, the Davis family has stayed healthy. “We haven't been tested and no one has suggested that we should. None of us have been around anyone with symptoms,” Jeremy said.

A Science Magazine article posted online on March 17 praised the South Korean government for “the most expansive and well-organized testing program in the world, combined with extensive efforts to isolate infected people and trace and quarantine their contacts.”

“In general, people are staying home a lot,” said Jeremy, writing from his home in Gwangju in the South Jeolla Province, a city of about 1.5 million. “Restaurants don’t seem to have as many people. The streets are pretty quiet. Everyone is wearing masks outside, which may or may not be effective, but at least they prevent you from touching your face. New infections have drastically slowed here, so hopefully things will be returning to normal soon.”

Jeremy offered his advice to fellow Americans now impacted by the COVID-19 outbreak in the United States: “The common sense advice is the most important. Wash your hands, don’t touch your face, and don’t go out in big groups. If people follow those simple things, the curve of new infections will flatten. Just be patient and ride it out.”

Jeremy, along with wife Jamie and their daughter have lived in South Korea since 2015. The couple met at SCC. “We had an American literature class together,” he said. “It wasn’t until years later that we began dating though.”

“We both teach at the same kindergarten/private English academy,” said Jeremy. “Our daughter was a few weeks shy of her fourth birthday when we arrived. Her Korean is really great; she even attends public school.”

Jeremy said his interest in Korea dates back to high school when he watched Korean news on late-night TV. After finishing his degree at Wilmington, he became eligible to teach English in South Korea.

“It seemed like the more I read about North Korea, in English or Korean, the less confident I became in what I thought I knew,” he said. “Eventually, I had to turn to material written by academics to find anything that made sense. The political situation between the two Koreas and the United States seems to me to be one of the most interesting things in the world right now.”

Jeremy plans to earn a master’s degree in North Korea Studies or Korean Unification Studies and become completely fluent in Korean. “My Korean right now is good, but not great,” he said.

“I’m currently applying to graduate school, but the program I’m applying for is very competitive,” he said. “If I were to be successful, I’m interested in moving on from teaching into a career with an NGO [non-governmental organization] or a group working with North Korean defectors in South Korea.”

Jeremy graduated from Salem High School and attended SCC thanks to the NJ STARS program. “Going from high school to SCC, I needed to learn to develop better study habits, and just better habits in general. My educational experience at SCC helped me mature a little, and eventually, when I decided to get a bachelor’s degree, all my SCC credits transferred.”

His advice to prospective SCC students: “Think about your short-, mid-, and long-term goals, and how attending SCC relates to them. If you’re aware of your goals and know what you’re doing, you can’t go wrong.”