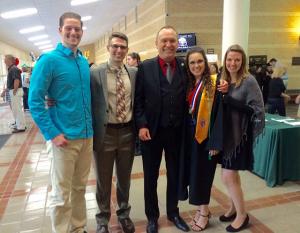 Following his retirement this spring after 30 years of service, Burbine was named Professor Emeritus by the Board of Trustees. “Although Mike is stepping down as a full-time professor,” said Board Chair Scott Kramme at June’s virtual awards ceremony, “he has made a promise to President Gorman – that he would be here for us well into the future to support the College.”

After working his way up the administrative ranks, Burbine joined the full-time faculty in 2006, becoming only the College’s second full professor in 2017. He’s highly respected and admired for his inspiring lectures in a variety of subjects including history, geography, philosophy and education.

Describing the professor emeritus title as a “humbling honor,” Burbine said he hopes to be remembered for two things: Mentoring new faculty and his sense of humor.

“It’s really important to help make new faculty feel welcomed, to take them under your wing,” he said. “If not, it fractures the sense of community.”

The transplanted New Englander recalls aspiring to become a teacher ever since childhood. First, though, he had to overcome his “biggest challenge” – being “extraordinarily, painfully shy.”

He said he owes a debt of gratitude to his late parents, who never earned a high school diploma, for their many sacrifices. “What would my parents be thinking,” Burbine asked, when pondering how they would have reacted if they knew that his dream came true. “They’d be flabbergasted – and proud.”

For Burbine, his professional fulfillment comes from working with SCC students and preparing future educators. “I would teach for free because I love teaching so much,” he said.

“Coming to Salem Community College was the best decision I ever made in my life,” he said at the awards ceremony. “It provided opportunities that I couldn’t have found elsewhere. This is an extremely special place.”

Now that he has become SCC’s first professor emeritus, Burbine relishes the opportunity to stay connected. “I’m not going anywhere,” he told his colleagues at a virtual ‘roast and toast’ event, pointing out that he thrives in Salem Community College’s family atmosphere. “I can’t live without that.

“My heart will never leave this institution,” he continued. “I honestly anticipate returning to the classroom. There’s another chapter still to be written.”

Caption: Following his retirement this spring after 30 years of service, Salem Community College’s Michael D. Burbine was named Professor Emeritus by the Board of Trustees. After working his way up the administrative ranks, Burbine joined the full-time faculty in 2006, becoming only the College’s second full professor in 2017. He is pictured here with the Yangello siblings of Pennsville in 2016. From left: Franky, Aaron, Dana and Tina – all SCC graduates.