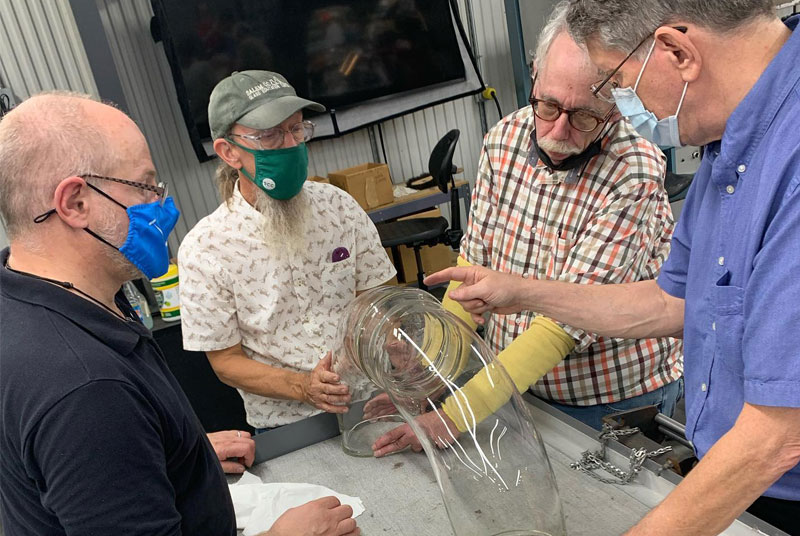 Russell pointed out that Princeton sought out SCC for two reasons. “First was the size of our facility,” he said. “Because of the heat involved in working the glass, Mike [Souza] would have set off the sprinklers in his shop. He had to get the machine shop at Princeton to make special holders which worked well and we had the fires and lathes to handle the work.”

Russell added the second reason was to enable students to observe a rare procedure first hand. “Not even in the working world would most glassblowers see such an operation,” he said. “It was also an opportunity to highlight SCC and our glass programs which Mike and Klaus are big fans of.”

The procedure entailed re-shaping four six-inch diameter, 90-degree bends of borosilicate glass, which when assembled will create a torus (donut) for a stellarator. The original pipes, normally used in plumbing systems in large factories, were not true enough to fit together precisely and to fit into the housing that holds the magnets, explained Russell.

“With the holders we were able to re-shape the pipe so we could make a circle that should fit inside the housing,” Russell said. “It was not as easy as we first thought but we worked out the bugs and got it done.”

A 42-year scientific glassblower and a 1979 SCC graduate, Russell said that collaborating with Souza and Paris was exciting. “To witness and be part of a project that could change how we get our energy in the future was just amazing,” he said. “Most glassblowers would never have the opportunity to be witness to or work on such an endeavor. I want to thank Mike Souza and Dr. Mike Zarnstorff of Princeton Plasma Physics Lab for including us. I hope it is a great success.”