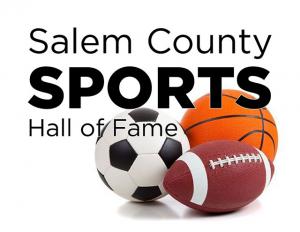 The Salem County Sports Hall of Fame will hold its annual induction ceremony on Monday, August 26. The event – free and open to the public – will begin at 6:30 p.m. in the Sol and Jean Davidow Performing Arts Theatre, Davidow Hall, on the campus of Salem Community College, 460 Hollywood Ave., Carneys Point.

Paula Shea Crispin coached varsity field hockey, tennis and softball at Woodstown High. Her 1978 field hockey team was crowned South Jersey champions and reached the state final. During her career, Paula coached her field hockey and softball teams to 100 wins. Her teams were Tri-County Conference champions in all three sports. She is proud to have coached hundreds of talented girls at Woodstown.

Paula also volunteered as Woodstown Middle School hockey and basketball coach. For several summers, she coached the Elmer swim team and taught tennis at Woodstown Community School. She also served as an assistant coach and referee for field hockey for Alloway Township. Paula now works as a school nurse throughout Salem County and continues to volunteer.

Lee’s love for the rodeo began at the young age of seven when his mother took him to the original Cowtown Rodeo in Woodstown. By age 12, he knew he wanted to be a professional bull rider. Lee built a small arena and bought a bull so he could practice every day. By 19, he started receiving invitations to ride in Toronto, Canada; Factoryville, Pa.; and other rodeos throughout the country. His most memorable were the Gene Autry and the Roy Rogers/Jim Eskew Rodeos.

In 1950, Lee began his professional bull riding career at the Madison Square Garden Rodeo, where he rode in 42 performances. While riding in New York, he met the love of his life Loraine and was married shortly after. Lee continued to ride until 1967 when he decided it was time to retire after many injuries, raising a large family, and starting a contracting business. This business flourishes to this day after four generations.

Professionally, Jeff had a career average of .302 in the minor leagues in the Boston Red Sox organization. He now serves as controller with New Readers Press, ProLiteracy’s publishing division.

Myles N. Martin has earned national recognition as a scholastic and collegiate wrestler. At the McDonogh School in Owings Mills, Md., the Penns Grove native was three-time Maryland State champion, four-time finalist, three-time National Prep Champion, four-time finalist and two-time Most Outstanding Wrestler National Preps. He was two-time Beast of the East Champion and earned Most Outstanding Wrestler Award. The McDonogh School all-time wins leader (174), Myles was two-time Baltimore Sun Wrestler of the Year (2014 and 2015). At 182 pounds, Miles was ranked first in the country by multiple outlets.

After graduating in May, Miles signed with the Ohio Regional Training Center and continues to train for the Olympics and World Team in hopes of representing the USA.

Coach Fred Pratta guided St. James High School to the Parochial B baseball tournament from 1981 to 1991. In 1988, the Spartans won the state title for the first time since the inception of the NJSIAA tournament. His program also won six Classic Division titles and two South Jersey titles.

Later, he was assistant principal and principal of the Alloway Township School, and served as superintendent of the Lower Alloways Creek School from 2002 through 2013.

Jeremy Simkins was a three-sport athlete (football, basketball and track) at A.P. Schalick High School, graduating in 2007. He went on to compete in football and track and field at the University of Delaware.

Jeremy currently holds eight Schalick football records. His senior year, he was selected as the receiver of the year by the South Jersey Touchdown Club and named to the All-South Jersey All-Group team. Jeremy was a three-year starter for the Cougars basketball team, earning first team All-Tri County his senior year. In track, Jeremy was a four-year letter winner. He was three-time Tri-County champion in the 110 high hurdles and two-time Tri-County champ in the 400 hurdles. In his senior year, Jeremy qualified for four events at the state meet. He won the Group II Sectional and State Championships in the 400 meter intermediate hurdles and finished fourth in the 110 high hurdles. During that season, he set individual records in the 400 meter (49.7), the 800 meter (1:58.45) and 400 meter intermediate hurdles (53.87) and helped set the 4 x 800 meter relay record.

Playing for the UD Fightin’ Blue Hens football team in 2007, Jeremy was part of the historic run to the national championship game where the Hens fell to Appalachian State. After the season, he chose to focus all of his efforts on track and field for the Blue Hens indoor and outdoor teams. He was named UD Athlete of the Year for the 2008-09 school year. He currently still holds three UD records (600 meter, 4x400 meter and 400 intermediate hurdles). He graduated from Delaware in 2011 with a bachelor’s degree in marketing.

Community Service Award - The following individual will be honored posthumously for decades of outstanding community service to Salem County sports:

Sports was always a big part of Dale’s life. As a child and teenager, he played football and baseball, and wrestled, excelling in all three. As an adult, he played men’s softball and coached. He also organized a men’s softball league, a Babe Ruth baseball league for youth and the Lower Alloways Creek youth league, which included various sports for girls and boys during the school year. Throughout the years, Dale also coached youth in baseball, softball and wrestling. He also organized an umpire’s association for men’s softball and youth baseball. His three children -- Dale, Ryan and Renee’ -- will proudly accept this award in memory of their father.