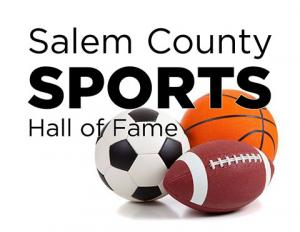 The Salem County Sports Hall of Fame will hold its annual induction ceremony on Tuesday, August 28.  The event – free and open to the public – will begin at 6:30 p.m. in the Sol and Jean Davidow Performing Arts Theatre, Davidow Hall, on the campus of Salem Community College, 460 Hollywood Ave., Carneys Point.

Anthony Butler - This Arthur P. Schalick high jumper was the two-time South Jersey champion and 1999 New Jersey Group II champion. While in high school, he competed in the Penn Relays three times, finishing sixth in 2000.  That same season, he finished second in the New Jersey Meet of Champions.  At Rutgers, he was named 2003 Big East champion and 2003 Metropolitan champion, and 2003-2004 IC4A champion.  In 2004, Butler was named Eastern Regional champion and Rutgers University's most valuable athlete.

Fedele "Fred" DePalma - This Penns Grove High School track and field athlete competed in the javelin, shot put and discus, and represented the Red Devils as premier javelin thrower on the All-South Jersey track team.  At the 1969 NJSIAA state track and field championship meet, the junior set a Group 2 NJSIAA record (220-8). The following year at the Meet of Champions (MOC), DePalma set a MOC javelin record (204-10).  He went on to successfully compete at the University of Pennsylvania, where he became the IC4A javelin champion (233-11) and tri-captain of the track team.

Rich Gatanis – A Carneys Point resident, Gatanis coached football and baseball teams for decades.  On the gridiron, he coached his midget league teams to 10 championships.  His 1981 team at St. James High School went undefeated on the way to the Parochial B championship. On the baseball diamond, Gatanas coached Salem Community College baseball for eight years and Babe Ruth teams for 14 seasons.  His 1973 Pennsville Babe Ruth team won the Southern New Jersey state championship and his 13-year-old Babe Ruth All-Stars were 1977 New Jersey and Mid-Atlantic regional champs. Gatanas is a founding member of the Salem County Sports Hall of Fame (formed in 2000).

Bill Hyatt – This two-sport standout at Pennsville Memorial High School pitched the first no-hitter in school history in 1968.  As the quarterback of the football team, he earned 1966 All-Tri County first team and All-South Jersey Group 2.  At Glassboro State College (now Rowan University), he was a three-time, first-team, all-conference quarterback. Meanwhile, on the baseball diamond, Hyatt played on two conference championship teams.  In the 1969 NAIA World Series, he struck out 15 against Columbia University (Georgia).

Marty Smith – This Salem High School basketball player was named first team All-Tri County Conference in 1962 when the Rams won their second straight championship. Upon graduating from Salem, Smith played basketball his freshman year at the University of Arizona before transferring to Washington College in Chestertown, Md.  Smith is remembered as an exceptional athlete and a trail blazer – one of the first four African Americans who integrated and graduated from Washington College and the first African American to represent the college on a major athletic team.

Darlene Gareis Truesdale – This Pennsville Memorial High School Class of 1991 graduate was a four-time varsity letter winner in softball. She was honored as a two-time New Jersey All-State and three-time All-South Jersey athlete.  Truesdale was twice named Salem County player of the year and honored as the 1991 South Jersey pitcher of the year.  At the University of South Carolina, she was a two-time All-South Region pitcher who hurled three no-hitters (including two perfect games). She ranks as the Gamecocks all-time wins leader (102).

The following individuals will also be honored at the ceremony for decades of outstanding community service to Salem County sports:

Dr. Charles Liebeknecht – Dr. Liebeknecht is highly regarded as a caring and sincere doctor who was a school sports physician from the 1960s until the 1990s.  Affectionately known as “Doc,” he was recognized as the Cumberland and Salem Counties 1999 Distinguished Citizen Award.

Richie Raine – This former wrestler at Pennsville Memorial High School has enjoyed a nearly 50-year association with Pennsville Mini-Wrestling as a coach, president and, since 1986, director of the MAA-AAU tournament.  As director, Raine has helped to keep the tournament in Pennsville.  While many tournament locations have come and gone, Pennsville is the longest-running tournament location in the four-state area, mainly because of Raine and his committee. He also served as a wrestling official for high school matches for 10 years.

The following high school athletes will be honored for winning state championships in the 2016-17 and 2017-18 school years: