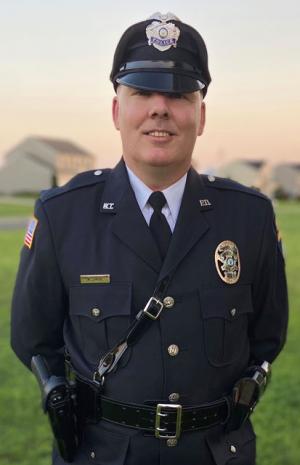 Michael J. Smith, a patrolman with the Winslow Twp. Police Dept., started his public service career in 2000 at age 20.  While enrolled at SCC, he became a firefighter and emergency medical technician (EMT) at Carneys Point Fire Department and Rescue Squad.

“During that time, I also enlisted in the United States Army,” said Michael, who earned his associate degree in criminal justice from SCC in 2005.  “My first deployment with the military was in 2004. The satisfaction I gained from the volunteer service and time in the military only intensified my drive to continue with a career path in public service.”

Michael’s mother, Bessie (BJ) Ayars, a lifelong volunteer and a career emergency response specialist, greatly influenced his career path.  “I followed in my mother’s footsteps,” he said.  “I became an EMT and we both went through the Camden County fire academy together, graduating as one of the first mother/son classmates. I have looked to my mother for many inspirations including helping guide me into Salem Community College where she is an alumna and was an employee at the time.”

Smith knows that he must be ready for the routine and the unusual in every shift. “As a police officer, you must always be prepared, physically and emotionally, to handle any level of intensity in your day,” he said.

A police officer since 2013, Michael explains what brings him the greatest job satisfaction.  “A simple ‘thank you’ may seem like a minuscule thing, but it carries the most weight,” Smith said. “Recently, I responded to a medical call where an elderly resident had fallen down a flight of stairs. While EMS treated the patient, I noticed a child about eight years old sitting alone and looking frightened. She was the patient’s granddaughter. I sat with her and talked about school, friends, family and even explained what the EMTs were doing to her grandmother, to try and alleviate the girl’s fears. As I got up off the step, a family member looked at me and just said, ‘Thank you’.”

Michael shared advice to students interested in a law enforcement career. “Don’t limit your education to just law enforcement or criminal justice classes,” he said.  “As a police officer, you must be well rounded. Learn how to communicate with people, how to gauge people’s emotions and feelings based on their words, actions and body language. Branch out into sociology, psychology and even history. Educating yourself in various fields will help you make life-altering decisions within seconds.”

Over the next 10 years, he plans to earn a master’s degree in administration of justice and security, then hopes to teach at SCC. “I’d like to follow in the footsteps of one of my mentors, Professor Reggie Smith. He opened my eyes to the criminal justice system as not just being about power and authority but rather an organized system of due process for everyone while maintaining law and order.”

Considering the national spotlight on police reform, what is Patrolman Smith’s vision for community policing?  “My vision starts with spending time going to local grade schools talking with staff and students -- helping the children realize that police officers are good, safe and trustworthy people,” said Michael, who praised Winslow Township police department’s community initiatives, including “Coffee with a Cop,” “Cones with a Cop” and “Cops and Bobbers” (residents and officers spend the day fishing).  “I want the children to know that if they see me on the street, they can trust coming over and talking to me. I believe that if the police departments build strong bonds with their residents, they will support and trust their local officers.”

While at SCC, Michael valued his extracurricular activities – playing on the basketball and baseball teams and serving as student government president. “Each activity helped mold me into the person I am today because of the life experience it gave me,” he said.  “The saying, ‘Education is not just what you read, it’s what you do,’ summarizes my entire educational journey with SCC.”

Smith became a remote learner long before it suddenly became the norm at SCC.  When first deployed to Iraq in 2004-2005, he was two SCC classes shy from graduating.  With the support of then-President Peter B. Contini and the SCC administration, Michael completed both classes through distance learning, communicating with faculty by email and completing all necessary coursework while overseas.

Having just returned from his first deployment, Michael walked in the 2005 Commencement Ceremony. The evening included a moving recognition of his military service and unique academic feat by President Contini.

While working and raising a family of three daughters with his wife Christine, Michael earned a bachelor’s degree in business administration and management from the University of Phoenix in June 2020.

Meanwhile, back where his public service career started, Smith earned life-member status with Carneys Point Fire and Rescue after serving in various leadership positions including lieutenant and assistant chief.