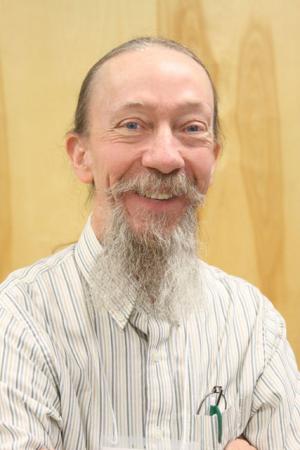 Bob Russell commemorated the 60th anniversary of Salem Community College’s renowned program in Scientific Glass Technology (SGT) by researching and chronicling its history. He was ideally suited for the assignment. He is a 1979 graduate and enjoyed a successful 39-year career in the glass industry. After retiring from Chemglass Life Sciences, he became the SGT Instructional Chair in January 2018.

SGT traces its humble beginnings to 1959 at the Fenwick Building in Salem. Now the only associate degree offering of its kind in the nation, the program attracts students from across the United States and around the world. In his research, Bob learned that before reaching its highly regarded status today, SGT survived enrollment declines that almost led to its demise more than once. Today, Scientific Glass Technology is housed in the Sam and Jean Jones Glass Education Center (GEC), where Russell anticipates the program’s eventual growth beyond the associate degree.

Russell’s article appears in the most recent edition of Fusion, the quarterly journal of the American Scientific Glassblowers Society. He will also present a PowerPoint of the SGT history at the opening program of the 2022 International Flameworking Conference next March.

Russell answered the following questions about the research project and his thoughts on the program’s future.

Did you discover something you didn’t know about the SGT program during your historical research?

“There are actually several things I learned. The first is when the program actually got its start and the fact that it was not the only program in the country. I also knew when I was here in 1978-79 we were basically running on empty but didn't know it was the same way a few years earlier and the students fought to save the program.”

What factors do you attribute to the SGT program’s longevity?

“The most important reason the program has sustained the test of time is the support it gets from SCC, its faculty and students. Also, the need for skilled glass workers has not diminished, even as the industry has changed. Being close to the center of the scientific fabrication shops in Vineland has kept the program relevant. The reputation of the students who have graduated has also helped to keep it alive.”

How do you foresee the SGT program changing to support the scientific glass industry over the next decade?

“With the larger GEC and continued support from Salem Community College and the country-wide glass industry, I see a future with more education beyond the two-year program. Expanding beyond the current four semesters will enable the program to expand into more exotic uses and types of fabrication we don't have the time to cover in two years. While the basics will never change, the types of glass and its usage is constantly evolving and the program will also.”