From SCC to Moscow​ 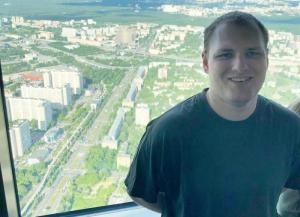 Since graduating with high honors from Salem Community College in 2011, John Stanko’s academic and career journey has taken him to Texas, Kansas and Russia.

Since September 2018, Stanko has taught English at the Samantha School of Foreign Languages in Moscow. “My favorite part of the job is having discussions with my students on a variety of interesting topics,” he said. “The most challenging aspect is, oddly enough, the divide between British English and American English. Russians learn British English, and there are a lot of subtle and some not so subtle differences in the way the two versions are used and pronounced. It took some adjusting to get used to teaching British English.” John cited an example: "I live in Baker Street" (British) versus "I live on Baker Street" (American).

Stanko foresees starting on a Ph.D. next year. Eventually, he plans to conduct policy research/analysis, focusing on foreign policy. In the meantime, he’s learning Chinese through an online course and will continue teaching English in September.

John finds that life isn't so different in Russia. “Probably my favorite part of living and working in Moscow is being able to meet a lot of new people -- not just Russians, but people from the Caucasus, Central Asia, the Middle East, and Europe as well,” he said.

But Salem County will always be home and SCC “will always be the school where I got started on my academic and career path. SCC was basically the critical first step,” continued John, whose siblings Marissa, Charles and Theodore are also SCC grads. “It was the place that opened the first doors for me to pursue my interests. I was actually discussing my experience as a homeschooler with some Russians at a language exchange last month, and I was asked how I managed to get into college since I never took the SAT. And the answer was Salem Community College. I was able to demonstrate my abilities at SCC and parlay that into scholarships at Texas Tech.

“The great thing about SCC, and community colleges in general, is that you get a chance to establish yourself, regardless of where you're starting out from,” he said. “I'm still proud of the fact that [then-President] Dr. Contini wrote one of my recommendation letters for TTU. And there are still numerous entries on my resume that date to my time at SCC, be it as a student assistant or as a member of student organizations.

“I know usually the term ’stepping stone’ isn't especially complimentary,” he said, “but I think it is in this case. I am continuously building toward my goals, and each place I go, whether as a student or a professional, contributes something to that.”

Caption: SCC graduate John Stanko earned a bachelor’s degree at Texas Tech University and a master’s at the University of Kansas.  He now teaches English in Moscow. Stanko speaks Russian proficiently and is learning Chinese.