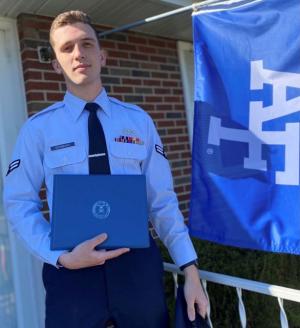 Salem Community College student Nicholas DeDomenico has been appointed to the United States Air Force Academy. The Carneys Point Township resident is a 2019 graduate of Salem County Career and Technical High School and will earn an associate degree in Nuclear Energy Technology (NET) in May.

The son of Robert DeDomenico and Elaine Olita-DeDomenico, Nicholas started the NET program at SCC during his freshman year in high school. “Salem Tech provided me the ability to pursue a college major as my ‘Academy program,’ enroll in honors courses, get hands-on training and serve my community in the Air Force Junior ROTC. There is no other school in the county that offers this, and without it, I would not have had the experience required for a competitive Academy admission.”

Joseph Rojas, a retired Lieutenant Colonel in the U.S. Air Force and a teacher at the Salem County Career and Technical High School, praised his former student. “In seven years as an Air Force Junior ROTC instructor, having taught over 500 cadets, Nick is the most outstanding cadet and young man I've had the pleasure of being associated with,” said Rojas. “He is undoubtedly destined to do great things!”

While an SCC student, DeDomenico attended boot camp at Lackland Air Force Base, Texas and technical school at Naval Base Ventura County, Port Hueneme, California, where he started training as an Air Force mechanic. “When I wasn’t training, I led the Drill Team program and Airman Leader program,” he said.

Thanks to earning so many college credits while in high school, he’s on track to earn his associate degree before leaving for the Air Force Academy in June. “I am benefiting from my education at SCC because of the reduced cost, locality, and sports program,” said the Dean’s List student and member of the Phi Theta Kappa international honor society of two-year colleges. “The SCC faculty and staff are also very flexible with my coming and going on orders in my unit.”

DeDomenico recalled how he learned of his appointment to the U.S. Air Force Academy. “I was called into my Commander’s office around 3 o’clock on a Wednesday, completely unexpected,” said Nick, who is currently on temporary active-duty orders at Atlantic City Air Guard Base. “I thought maybe I had done something wrong without my knowledge, but it was a very pleasant surprise to hear he wanted to be the first to pass the news that I’ve been appointed as he turned his monitor around to show an email from USAFA. The weight of anticipation lifted instantly and it felt like peaking the top of Kingda Ka [the world’s tallest roller coaster, located at Six Flags Great Adventure]. I was proud, excited, and severely motivated all at once because a lot of hard work has finally paid off (it isn’t the end though).”

DeDomenico and his brother (and fellow SCC student) Andrew -- who is in boot camp at Marine Corps Recruiting Depot, Parris Island, and slotted to be an infantry machine gunner -- are the family’s fourth generation to serve in the military. Their great grandfather was a Naval officer and first generation Italian immigrant. The brothers’ grandfather was an aviation mechanic on the USS Hornet and their father was a Navy nuke (a nuclear specialist) on the USS Archerfish.

“Ultimately, I’d like to start my Air Force career as a Close Air Support pilot flying the A-10 Thunderbolt II, commonly known as the ‘Warthog,’” said Nick. “As I progress, I plan on pursuing additional higher education and commanding a Fighter Wing.”

Caption: SCC student Nicholas DeDomenico has been appointed to the United States Air Force Academy. The Carneys Point Township resident will earn an associate degree in Nuclear Energy Technology in May.