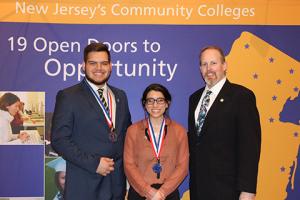 Salem Community College’s Justin Schaller and Debora Saavedra, members of the Class of 2017, were honored recently along with 37 other outstanding college students as members of the New Jersey All-State Academic Team at the 23rd annual Phi Theta Kappa Day celebration in Trenton.

Each year, the New Jersey Council of County Colleges (NJCCC) honors New Jersey’s top community college students for their outstanding academic achievements and exceptional service to their communities as members of Phi Theta Kappa at their local community colleges, according to NJCCC President Dr. Lawrence Nespoli.

Saavedra was service coordinator in the Phi Theta Kappa honor society chapter.  The Salem resident was selected by her classmates to give the Commencement address.  Having earned an associate degree with high honors in education, Debbie will transfer to Wilmington University. After earning her bachelor’s degree, she plans to teach middle school social studies and English as a Second Language.  She also will pursue a master’s degree.

Schaller was the Phi Theta Kappa chapter’s vice president.  A Pedricktown resident, he was co-founder of the Performing Arts Club and served on the Student Life Committee.  Schaller earned an associate degree with high honors in mathematics and will transfer to Rowan University.  He plans to enter the mathematics field to become a statistician or work in data management.  He earned the School Counts! and NJ STARS scholarships to attend SCC.