Salem Community College (SCC) creates a significant positive impact on the business community and generates a return on investment to its major stakeholder groups—students, taxpayers, and society. Using a two-pronged approach that involves an economic impact analysis and an investment analysis, this study calculates the benefits received by each of these groups. Results of the analysis reflect fiscal year (FY) 2016-17. 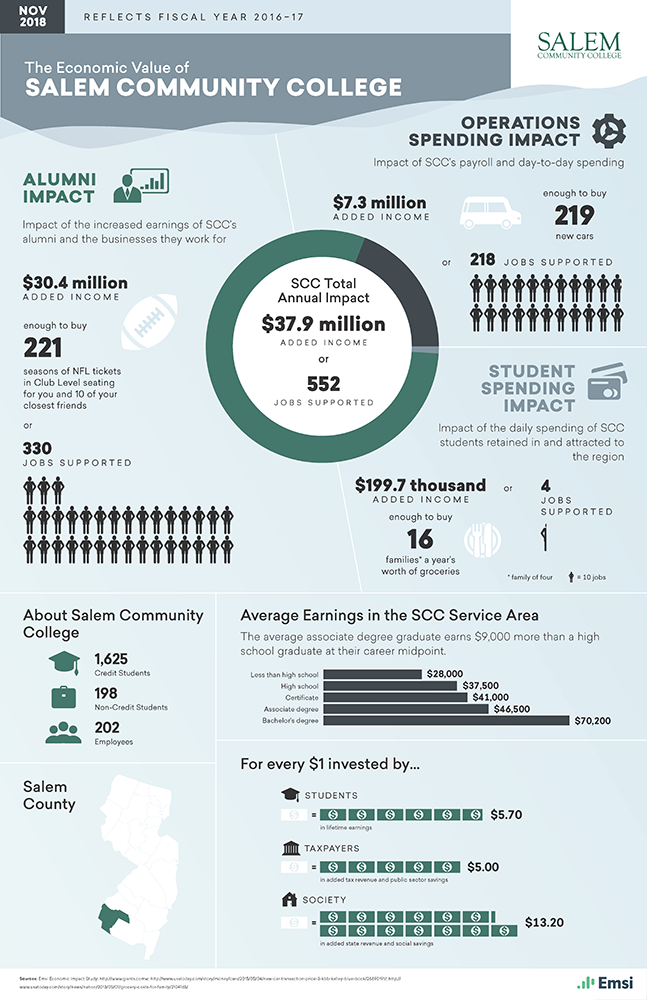 RETURN ON INVESTMENT TO STUDENTS, TAXPAYERS, AND SOCIETY

SCC’s FY 2016-17 students paid a total present value of $5.7 million to cover the cost of tuition, fees, supplies, and interest on student loans. They also forwent $8 million in money that they would have earned had they been working instead of learning.

In return for the monies invested in the college, students will receive a present value of $78.6 million in increased earnings over their working lives. This translates to a return of $5.70 in higher future earnings for every dollar that students invest in their education. The average annual return for students is 17.2%.

In FY 2016-17, state and local taxpayers in New Jersey paid $5.2 million to support the operations of SCC. The net present value of the added tax revenue stemming from the students’ higher lifetime earnings and the increased output of businesses amounts to $23.9 million in benefits to taxpayers. Savings to the public sector add another $1.9 million in benefits due to a reduced demand for government-funded services in New Jersey.

Dividing benefits to taxpayers by the associated costs yields a 5.0 benefit-cost ratio, i.e., every dollar in costs returns $5.00 in benefits. The average annual return on investment for taxpayers is 11.0%.

The economic base in New Jersey will grow by $296 million over the course of the students’ working lives. Society will also benefit from $5.2 million in present value social savings related to reduced crime, lower unemployment, and increased health and well-being across the state.

For every dollar that society spent on SCC FY 2016-17 educations, society will receive a cumulative value of $13.20 in benefits, for as long as the FY 2016-17 student population at SCC remains active in the state workforce.

IMPACT ON THE BUSINESS COMMUNITY

During the analysis year, SCC and its students added $37.9 million in income to the Salem County economy, approximately equal to 1.0% of the county’s total gross regional product (GRP). SCC’s impact supported 552 jobs in FY 2016-17. For perspective, this means that one out of every 51 jobs in Salem County is supported by the activities of SCC and its students. The economic impacts of SCC break down as follows: 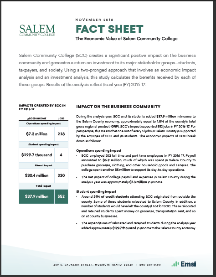 Salem Community College creates a significant positive impact on the business community and generates a return on investment to its major stakeholder groups—students, taxpayers, and society. Using a two-pronged approach that involves an economic impact analysis and an investment analysis, this study calculates the benefits to each of these groups for Fiscal Year (FY) 2016-2017. 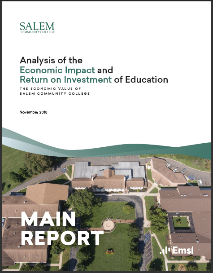 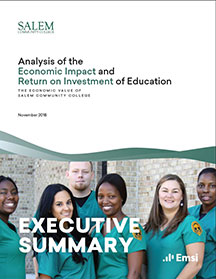 SCC creates value in many ways. The college plays a key role in helping students increase their employability and achieve their individual potential. It provides students with the skills they need to have a fulfilling and prosperous career. Further, it supplies an environment for students to meet new people, increase their self-confidence, and promote their overall health and well-being.