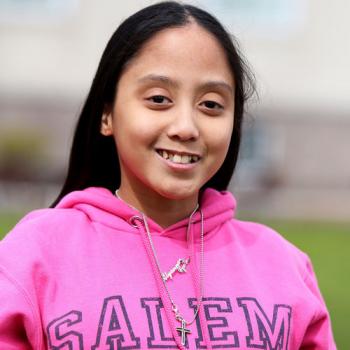 “Believe in yourself.  ‘You can do anything you set your mind to.'"

Alyanna Cruz now has two college diplomas on her wall. The December 2018 graduate in Social Science-Psychology earned her bachelor’s degree from Rowan University this month.

“Graduating from SCC and Rowan is a dream come true,” said Aly. “In 2016, I wrote a career research paper explaining what I was going to do after high school. I accomplished everything I said I was going to do.”

Aly is also proud to be a second generation college graduate, joining her mother Carolina O’Quinn, a fellow SCC alumna.

Aly arrived at SCC after graduating from Salem High School in 2016. “I chose the College because it has a very good academic reputation, and it was listed as the number one community college in the state,” she said, referring to the WalletHub ranking.

Recalling her SCC years as a time for personal growth and improved self-confidence, Aly credited the late Associate Professor Reggie Smith and Disabilities Support Coordinator Calvin Cizek as major influences. “Professor Smith and Mr. Cizek were my academic advisors, interchangeably,” Aly said. “They were there to assist me with scheduling classes, creating study plans, improving study and test skills, and always keeping their door open when I needed someone to talk to. They helped me stay focused and figured out what worked best for me.”

Not only has Aly earned a bachelor’s degree in psychology from Rowan, she is considering graduate school and pursuing a career in counseling or social work.

In a recent Facebook post, Aly wrote that she was born with Spina Bifida, explaining, “Doctors told my mom at birth I wouldn’t make it past childhood! I survived 30 surgeries, 3 seizures and I’ve been surgery free for 5 years!!” In the post, she shared a photo of a custom t-shirt with “Spina Bifida WON’T Keep Me Down on the front and “#AlyannaStrong” printed on the back.