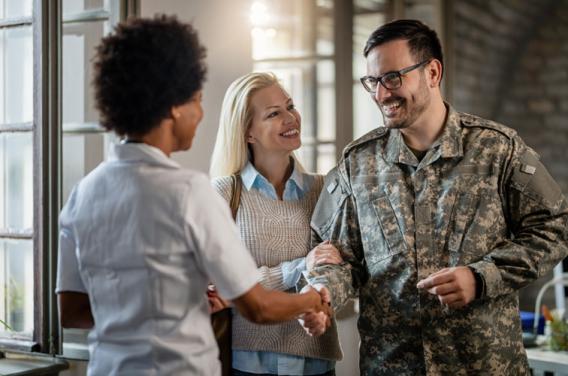 The following is a summary of information pertaining to benefits under the Veteran's Educational program, details of these benefits can be found on GIBILL.GOV.

To qualify for veterans' benefits, you must be enrolled in a degree-seeking program. If you are entering Salem Community College for the first time and believe you are eligible for veterans' educational assistance, apply at the Office of Veterans Affairs. The office has both day and evening hours to ensure access to all veteran students seeking information and assistance.

You will be required to submit a copy of your separation papers (DD 214) with your application. It normally takes eight weeks to receive the first payment following submission of the application package and certification of enrollment.

The Office of Veterans Affairs will serve as your focal point of contact. The staff is sensitive to the needs and problems faced by veterans returning to school, and strive to assure each veteran a successful academic experience.

To apply for benefits online go to: http://www.gibill.va.gov/apply-for-benefits/application

If you are using GI Bill® benefits, it is essential that you contact the Office of Veterans Affairs each semester to report your registration, and to make sure that you have been certified for that semester. Veterans must also report any course changes during the semester, to keep their file updated, and to avoid any unnecessary conflict in pay status.

Excessive absenteeism could result in your benefits being decreased or terminated. The Veterans Affairs Office is kept informed of attendance records, and will take appropriate actions to prevent overpayments by the Department of Veterans Affairs.

The Department of Veterans Affairs does not pay for non-punitive grades such as auditing of a course (AU), nor for courses which will not fulfill criteria for graduation in the chosen major. If you anticipate being absent from classes, notify your instructors and discuss the situation with them. It may prevent an excessive absence report from being initiated.

Students who have been away from SCC for one year or more must file a new application. If the student has attended another college, an official college transcript will need to be submitted for an evaluation. Placement scores are valid for three years; after three years students will need to retake the Accuplacer placement test. Students who have been separated from SCC due to academic problems should review their records with a Student Affairs advisor prior to registration.

Any veteran with a disability rating from the Department of Veterans Affairs of 20% or more is entitled to apply for Vocational Rehabilitation. Voc Rehab provides payment of tuition, fees, books, and required supplies along with a monthly subsistence allowance. If you believe you are eligible for Chapter 31 benefits, contact the Office of Veterans Affairs for more information.

Veterans are entitled to 36 months of training under Chapter 30, to be used within ten years of honorable discharge from active duty (delimiting date).

Eligibility is based on:

The Post - 9/11 GI Bill® is a new education benefit program for individuals who served on active duty on or after September 11, 2001.

No payments can be made under this program for training pursued before that date.

You may be eligible if:

You may also be eligible if you were honorably discharged from active duty for a service-connected disability and you served 30 continuous days after September 10, 2001. If, on August 1, 2009, you are eligible for one of these programs and you qualify for the Post-9/11 GI Bill®, you may make an irrevocable election to receive benefits under the Post-9/11 GI Bill®.

Visit www.gibill.va.gov for up-to-date information on this and other education benefits.

Effective July 1, 1985, members of the selected reserve of the U.S. Armed Forces may be eligible for 36 months of training under Chapter 1606 educational assistance, to be used within ten years of the date of eligibility on the "Notice of Basic Eligibility" (NOBE). The Unit Commander will provide a NOBE. Veterans must bring in this NOBE and fill out an application for GI Bill® benefits. These will be submitted to the DVA with a certification of enrollment at SCC.

Children and spouses of veterans who died or are permanently and totally disabled as the result of a service-connected disability are eligible for benefits under Chapter 35 of the Montgomery GI Bill®. Children must be between 18 and 26 years of age. Spouses must use the benefit within ten years of becoming eligible.

New Jersey offers a stipend to certain veterans who:

Available to members of the New Jersey National Guard, this program requires students to produce a Commander's Certificate each semester, and to file for all available State and Federal Financial Aid for each academic year. National Guard members must apply for chapter 33 benefits if eligible.

Some of the most common asked questions can be found here. If you still need assistance, please contact the Office of Veteran Affairs.

The Department of Defense announces the launch of the Postsecondary Education Complaint System which will provide a centralized online reporting system for service members and their families to use in reporting problems with education institutions.

Postsecondary Education Complaint System
How do I activate my GI benefits?

Fill out an application, available in SCC's Veterans Affairs Office, and provide a copy of your discharge papers (DD-214). This documentation will be forwarded, along with SCC's certification that you are enrolled for classes. You can also apply online at http://www.gibill.va.gov/apply-for-benefits/application.

How much does the VA pay?

My husband and father are veterans. Are there any benefits for me?

Only in the specific instances where the veteran is 100% totally and permanently disabled, or deceased from a service-related disability.

How long does it take for my VA check to start coming in?

How do I pay my tuition?

You will have to pay tuition in full by the College's deadline, or request a deferral from the Office of Veterans Affairs/Financial Aid.

Does the VA pay for my books?

No. You must budget for tuition, fees, and books from the monthly stipend.

GI Bill® is a registered trademark of the U.S. Department of Veterans Affairs (VA). More information about education benefits offered by VA is available at the official U.S. government web site at https://www.benefits.va.gov/gibill